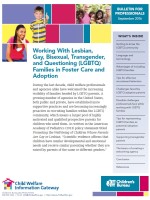 WHAT’S INSIDEGetting to know the LGBTQ communityLanguage and terminologyAdvantages of including LGBTQ familiesTips for effective recruitment/retentionChallenges faced by LGBTQ adoptive parentsPossible challenges professionals face while working with LGBTQ familiesTips for representing LGBTQ families as potential adoptive parentsSupporting transgender parentsThe basics of creating a welcoming agencyConclusionReferences
During the last decade, child welfare professionals and agencies alike have welcomed the increasing visibility of families headed by LGBTQ parents. A growing number of agencies in the United States, both public and private, have established more supportive practices and are becoming increasingly proactive in recruiting families within the LGBTQ community, which means a larger pool of highly motivated and qualified prospective parents for children who need them. As written in the American Academy of Pediatrics (2013) policy statement titled Promoting the Well-being of Children Whose Parents Are Gay or Lesbian, “Scientific evidence affirms that children have similar developmental and emotional needs and receive similar parenting whether they are raised by parents of the same or different genders.”